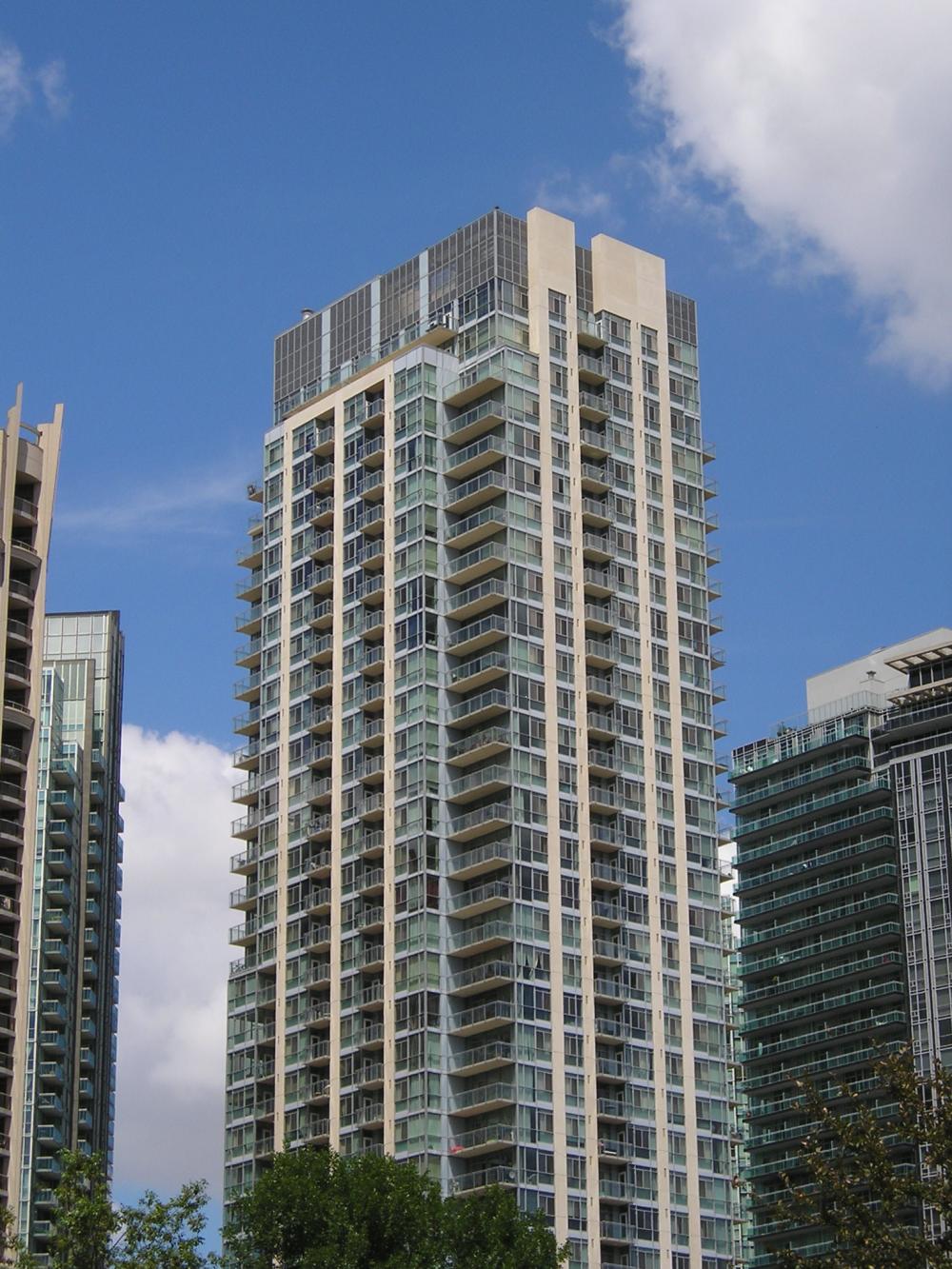 Solstice condo at Square One was the third high rise tower in the Mississauga city center area to be built and registered by Toronto developer Davies-Smith. Davies-Smith first completed the two CityGate towers located at 3939 Duke of York Blvd. and 220 Burnhamthorpe Rd. W., respectively, then built Solstice, before completing the fourth and final tower known as Onyx, located next door at 223 Webb Drive. Solstice was completed in 2008, and it was honored with several industry awards, including the Ontario Home Builders Association project of the year in 2005, and the National Association of Home Builders 2005 Attached Community of the Year. Solstice condominium has eye catching powder blue and tan colored cladding, and it is situated in a way that shares an entire city block with the other three towers. Square One shopping center Ontario’s largest mall, lies immediately to the north. Solstice itself consists of a single 38 storey point tower which is surrounded by a podium that contains a substantial amount of retail. If you are looking for Solstice condos for sale, the address is 225 Webb Drive.

Solstice condos are part of the latest wave of luxury condominiums which have been built and registered in the Square One area of Mississauga known as City Centre (MCC). Being located in such a central location, Solstice is close to all that MCC has to offer: Square One Shopping mall, with more than 360 stores and services, is about a 5 minute walk away, with the southwest entrance to the mall (The Bay) closest. In addition, Celebration Square with its vibrant community events, fountains, and skating rink in winter, Mississauga City Hall, the central YMCA, the central library, Sheridan College, the Living Arts Centre, and the Mississauga Transit and GO bus terminal are all within easy walking distance.

Solstice is also within walking distance of the Cooksville GO station, as well as both Father Goetz Catholic Secondary School, and T.L. Kennedy Public Secondary School. There is also nearby access to the 403 highway, and close proximity to major grocery stores such as the newly opened Whole Foods located on the north side of the mall, and the full grocery located in Walmart at Square One. Solstice itself also has a 24 hour food market located in its base, as well as several other retail outlets, doctor’s offices, and other businesses.

All About Solstice Condo

You are likely to find an abundance of luxury amenities in any condo built in Mississauga during the recent construction boom, and Solstice is no exception. Solstice condo at Square One features generous facilities for residents and their guests – with meeting and party rooms, rooftop lounge area with BBQ area, plus a home theatre room. Solstice also features an indoor pool, whirlpool, sauna, exercise room, and a gym.

Solstice is blessed with close access to several city parks. Kariya Park, which was originally a gift to Mississauga from the city of Kariya, Japan, is a 2 minute walk away. This excellent city park, with its serene Japanese gardens, is often the setting for wedding pictures for newlywed couples. Ten minutes walk away, nearby Mississauga Valley park features baseball and soccer fields, extensive BBQ areas, forested creek with plenty of wildfowl, and water splash pads for children. There is also major parkland facilities at nearby Zonta Meadows, as well as a new city park in the area directly west of Square One.

Throughout the condo, individual units have open balconies, many with terrific views of downtown Mississauga, Toronto, and points further afield. There is a mixture of suite types, ranging from studios to 2 bedroom plus dens, as well as 2 storey lofts. 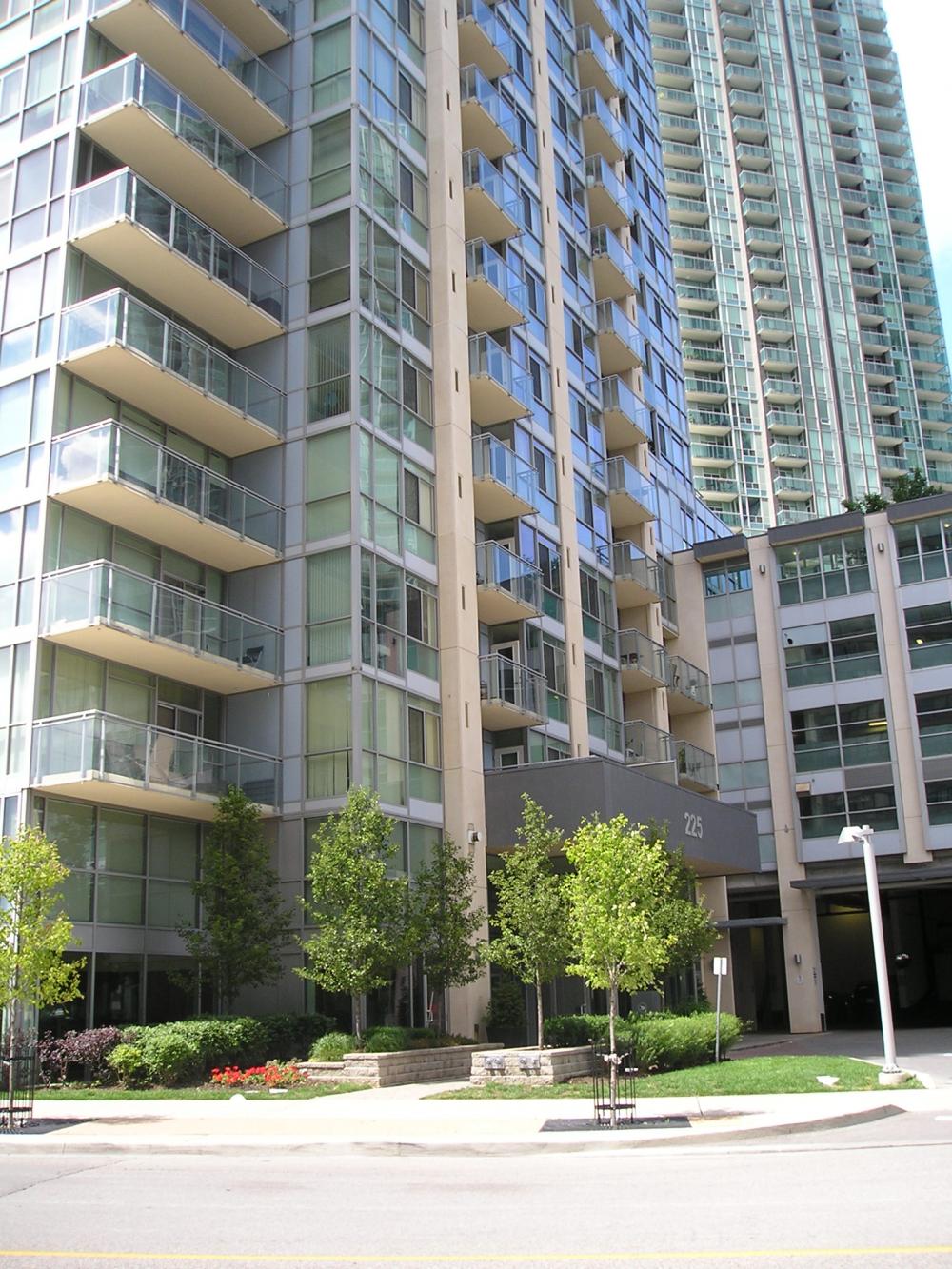 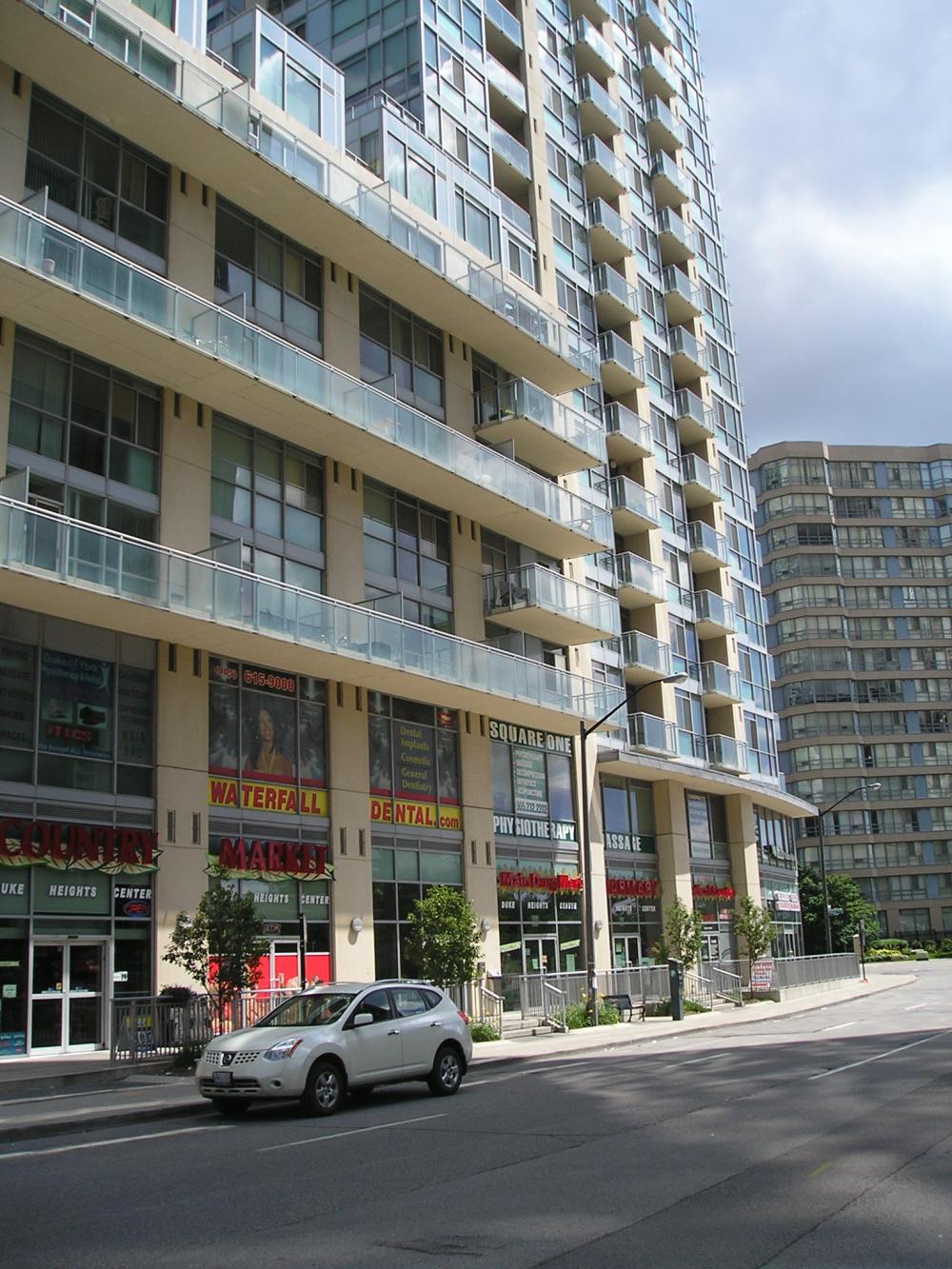 Resale and rental activity as reported by the Toronto Real Estate Board MLS system has been consistent with that of the overall Mississauga Square One real estate market – both steady and active. Recent selling prices at Solstice have ranged as follows:

Aided by its excellent location in the Mississauga Square One area, rental activity has also been strong at the Solstice Condos:

Interested in finding the right Mississauga condo for you? Don’t make a mistake and buy in the wrong building! If making the right choice is important, click here! You will get instant access, which will help you to get clear on what buildings are best for you, whether you are buying, selling, or renting.