Most Expensive Neighborhoods in Mississauga

Have you ever wondered what are the most expensive neighborhoods in Mississauga, Ontario? Well here they are in all their glory.

Mississauga has grown from a sleepy collection of small towns to a vibrant community of nearly 750,000 people. It’s a large city in itself and yet is also Toronto’s western suburb.

Even though the city is usually viewed as a middle class or upper middle class area, there are also many pockets of extremely high end homes that are sprinkled throughout the city.

Here you can find some of the best luxury real estate for sale in the Greater Toronto Area.

Some of these highly sought after areas of Mississauga feature amazing multi million dollar homes for sale. Many with up to 10,000 square feet and more.

There are a lot of homes here that are situated in park-like settings with enormous lots featuring swimming pools and tennis courts.

Here is a short summary of some of these luxury homes in Mississauga, and where you can find them.

Credit Mills is an area of large luxury homes located off of Mississauga Road, north of Eglinton Avenue, bounded by Erin Mills Parkway on the west, and the Streetsville old town limit on the north.

This neighborhood is a bit different from the others on this list, in that it was built in the fairly recent past, during the 1990’s.

Credit Mills features large, modern, luxury homes of 3000, 4000, and even 5000 square feet, on lots which are slightly smaller than some of the other neighborhoods in this survey – easier to maintain!

Many of these fine homes are on court locations. They have double or triple car garages, and are filled with the best and most expensive upgrades.

In addition, the area of Credit Mills is very close to the shops of Streetsville, Erin Mills Town Centre, and the Streetsville GO Station.

The primary road running through Credit Mills is Erin Centre Boulevard. Check out our feature page on Credit Mills homes.

Credit Pointe is another of Mississauga’s best neighborhoods. It is a circular-shaped  pocket of homes running off of Eglinton Avenue West, with the Credit River on its western edge.

This is a relatively small area that features some regular homes within its boundaries, but as you go towards its southern tip, there are several streets with very expensive, high end properties.

Credit Pointe is centrally located in Mississauga, and has great access to both the GO Train and Highway 403. Check out our feature page on Credit Pointe homes.

Mississauga Road runs north from Lakeshore Road, up to the QEW highway and further north to Dundas Street, the University of Toronto Mississauga Campus, and even further to Streetsville and beyond.

Along the way, you will find some of Canada’s finest luxury homes.

All along Mississauga Road are exclusive streets with pockets of fine and expensive luxury homes.

One of the streets running off of Mississauga Road is Doulton Drive, which leads to a small handful of streets known as the Doulton Estates. This pocket of homes is the most exclusive in the City of Mississauga.

Here is where you will find the most expensive homes in Mississauga.

Doulton Drive has the Credit River and one of the golf courses as its neighbor, and it features multi-million dollar estate homes up to 10,000 square feet.

Doulton Estates are one of the most expensive neighborhoods in all of Canada. See our feature page the mansions of Doulton Drive.

Gordon Woods is another of the most expensive neighborhoods in Mississauga, and is a small exclusive pocket of luxury homes, located near the Trillium Hospital in south-central part of the city.

Many people are unaware of this fine collection of expensive homes in a Muskoka-like setting.

The homes of Gordon Woods were originally built for the doctors practising at Trillium Hospital.

It’s not easy to find this area. It’s tucked away with Hurontario St. on its eastern boundary, Stavebank Road to the west, the Queensway to the north, and the QEW highway to the south.

Within the tranquility of Gordon Woods, it is hard to believe that you are actually in the centre of Mississauga. See our feature page on Gordon Woods homes.

One of the best areas of the city, and one of the largest, oldest and most prominent concentrations of Mississauga luxury homes, Lorne Park is bounded by Lake Ontario to the south, the QEW highway to the north, Southdown Road to the west, and Mississauga Road to the east.

Lorne Park Mississauga has many luxury homes nestled in tree-lined streets, with over 70 properties sold over the two million dollar mark in 2022.

Lorne Park is easily identified by the large, tall trees which abound in the area, and by its proximity to the lake.

There are several sub-areas within Lorne Park, including the Lorne Park Estates, which is a small, Muskoka-like area serviced by private roads, directly on Lake Ontario.

In addition, there is plenty of high end shopping available nearby.

Lorne Park Mississauga has plenty of multi million dollar homes, and you can expect to pay from $2 million to $3 million for a nice property as you get closer to Lake Ontario.

Definitely one of Mississauga’s top areas, Mineola West is a small pocket of luxury homes at the extreme northern end of the Port Credit neighborhood.

It is located on the west side of Hurontario, south of the QEW, bounded by the Credit River on its western edge.

This area features some unbelievable luxury homes on large lots, in a park-like setting with large tree canopy overhead.

All in all, the Mineola area is extremely quiet and secluded, and yet close to the GO Train and amenities of Port Credit. See our feature page on Mineola homes.

Old Meadowvale Village, located near Old Derry Road and Second Line West, is an up-and-coming area with plenty of new luxury real estate, including many homes over the $2 million dollar mark.

Definitely an area to watch!

There are many other expensive neighborhoods in Mississauga that feature exclusive luxury homes.

For sheer concentration of wealth, though, the above list showcases the most expensive neighborhoods in Mississauga.

back to: your real estate agent in Mississauga 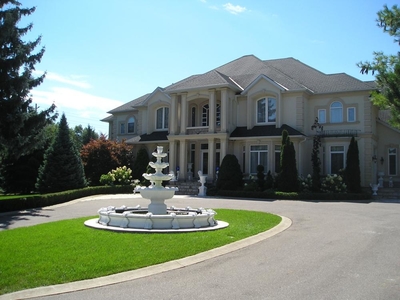