The school serves a catchment area that includes the densely populated Square One – City Centre area of downtown Mississauga. It offers schooling within a Catholic context for students in grades 9-12.

There are currently approximately 1375 students registered at this modern and attractively located facility.

Looking for a Home in this School District?

As with most Catholic high schools, students here are required to wear uniforms while attending classes.

This high school was founded in 1987, and it is considered one of the core Catholic secondary schools in Peel Region. It offers a wide assortment of academic courses for students, many of whom are new to Canada.

Michael Goetz provides a Specialist High Skills Majors (SHSM) program in Arts and Culture, as well as in Information and Communications Technology.

Although only Core French is offered here, Extended French instruction is available at nearby Philip Pocock Catholic Secondary School.

Finally, you will find a licensed child care centre onsite, operated by the PLASP non-profit agency.

The school has modern classrooms, plus a media centre, a large gymnasium, an auto shop, a broadcast studio, a cosmetology lab, rooms for computer study, music rooms, and a chapel.

Michael Goetz has a large individual and team (Gators) athletics program, including:

Students can find a wide assortment of extracurricular clubs and activities, including:

This Catholic high school has consistently scored about average in the Fraser Institute’s annual ranking. This year’s score was 6.3 out of a possible 10, and the school is tied for 374th place out of 739 high schools in the province of Ontario. Compare school rankings.

This school is located in the heart of downtown Mississauga, at the intersection of Central Parkway W., and Confederation Parkway.

Mississauga MiWay bus service serves the area with several routes. The nearest GO Station is Cooksville, which is 4 minutes away by car or bus, or about a 20 minute walk.

The Mississauga City Centre Transit Terminal, which is a hub for MiWay bus service and GO transit, is on the north side of the Square One mall. In addition, the terminal will soon be a key stop for the Hurontario LRT.

Square One Shopping Centre ,which is the largest shopping mall in Ontario, is within easy walking distance. There you will find extensive shopping, dining, and entertainment offerings.

There are numerous other commercial areas near to the school, including a shopping plaza directly across Central Parkway West, that includes a supermarket, doctors’ offices, a pharmacy, and several restaurants including a Tim Horton’s and the Lazar Deli & Bakery.

There are several nearby parks including Dr. Martin L. Dobkin Community Park, which backs directly onto the school. This park features baseball and softball diamonds with lighting for night games, a soccer field, plus tennis courts and children’s play areas.

The school itself has outdoor track and field areas, and two large gymnasiums.

Michael Goetz has a large catchment area with approximately Highway 403 on its northern boundary, Dundas Street to the south, Mavis Road in the west, and a somewhat irregular line following Cawthra Rd., Hurontario St., and Central Parkway E. on its eastern edge.

IMPORTANT DISCLAIMER: Not all boundaries are included. We make every effort to ensure that school and district boundary data is up-to-date. It’s important to note, however, that these are approximations and are for general informational purposes only. To verify legal descriptions of boundaries or school locations, contact your school board.

Father Michael Goetz Catholic Secondary School is a good school in a key central area of Mississauga. It has a great reputation, and acceptable rankings in the Fraser Institute grading system. 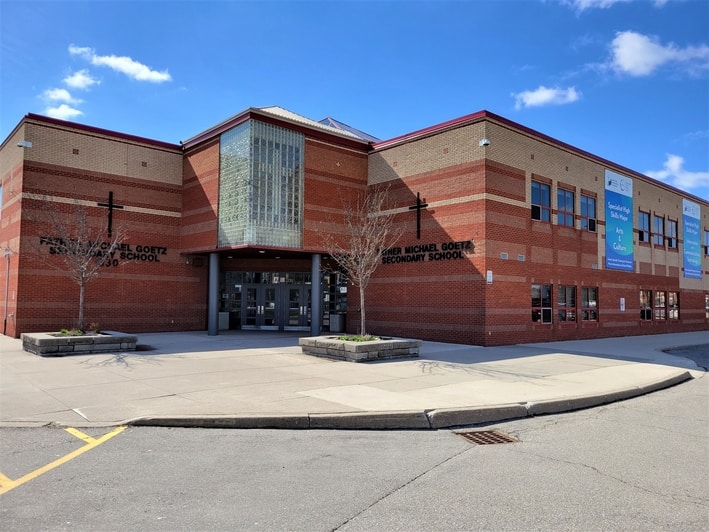