60 Absolute Ave was the first of the two Absolute World towers to be built, and the first one to be dubbed the “Marilyn Monroe” tower due to its curvy shape. It stands 56 storeys tall, and it has 427 condo apartments.

50 Absolute Ave is the second tower that was built, and has also been nicknamed a “Marilyn Monroe” tower. This second tower is 50 storeys, and it has 457 units.

Together, these two towers, aka the Marilyn Monroe towers, are among the most sought-after condos for sale in Mississauga.

The Absolute World Marilyn Monroe condos are actually the fourth and fifth towers in the overall multi-tower Absolute development at Mississauga Square One, which has a total of five towers.

These incredible twisting towers were the result of an international design competition which was won by Yansong Ma of MAD Studio architects, based in Beijing, China.

The local developers, Fernbrook/Cityzen, went on to build and complete the distinctive towers, which have since won international accolades, and Absolute World, which quickly acquired the nickname “Marilyn” due to its organic curves, has become a symbol of the City of Mississauga.

The Marilyn Monroe towers were named the Best Tall Building in the Americas in 2012 by the Council on Tall Buildings and Urban Habitat (CTBUH).

They were built and completed in 2011/2012, and today the Marilyn Monroe condos have a unique, instantly identifiable look that is visible for miles around.

There are also podiums on the west and south sides, containing garden apartments and retail. Municipal addresses for the two Absolute “Marilyn Monroe” condos are:

Looking to Buy a Condo?

Like other condos in the Square One area, Absolute is conveniently close to all that Mississauga City Centre (MCC) has to offer: Square One Shopping Centre, with its vast array of 360 shops, restaurants, and services, is just across the street. It is about a 3 minute walk away, with two southeast entrances to the mall (Walmart and The Bay) closest.

In addition to the shopping available at the Square One Shopping mall, there are a lot of additional options available nearby.

There is the Central Parkway Mall just couple of blocks further east along Burnhamthorpe Rd. E.

Here you will find a supermarket, a Rexall drug store, a Service Canada passport office, plus numerous additional stores and restaurants.

In the other direction, there is a fairly large mall at the Parkways West Shopping Centre at 325 Central Parkway West, including retails stores, restaurants, a supermarket, florists, and doctor’s offices.

There is another shopping area slightly west of here. The Rio Can Grand Park commercial centre has a Staples store, a Shoppers Drug Mart, a Winners store, and several restaurants.

In addition, there are dozens of stores, restaurants, and coffee shops in many of the nearby condos that surround the mall.

The Hazel McCallion Hurontario LRT, which is due to be operational by late 2024, is expected to further increase the transit score. The LRT will have a stop literally 2 minutes from the front door of this condo.

The Mississauga City Centre Transit Terminal, which provides connectivity for MiWay transit, GO buses, and the future LRT, is located on the north side of the Square One mall. This is the main hub for all of Mississauga’s transit systems.

Walking distance to the terminal is about 17 minutes, or 4 minutes by car.

50 and 60 Absolute Avenue are also a short driving distance to the Cooksville GO station, and Ontario Highway 403 is easily accessable via Hurontario St.

Residents will find close proximity to a number of major grocery stores such as the Metro located nearby on Mississauga Valley Blvd., Food Basics at Burnhamthorpe Rd E and Central Parkway, the Whole Foods located at the north side of Square One Shopping Centre, and the full grocery located within Walmart at Square One.

There are numerous elementary schools in the area, including the new Elm Drive Public School, which opened in September, 2022.

High schools in the area include:

Google reviews for 50 and 60 Absolute Avenue have been generally positive, averaging 4.0 out of 5 stars.

The various amenities are located primarily in an area known as “Absolute Club”, which offers an extensive list of attractions for residents and their guests:

The Absolute condo grounds feature extensively landscaped courtyards, with seating areas and walking paths. There is retail at the base of the towers, including the aforementioned 24 hour market.

The two Marilyn Monroe towers have extra-large open wraparound balconies, many with impressive views of downtown Mississauga, Toronto, and distant points such as Niagara Falls.

As a very centrally located condo, Absolute is near to several of the top parks in Mississauga.

Kariya Park, which was originally a gift to the city of Mississauga from the city of Kariya, Japan, is about a five minute walk away.

This renowned park, with its serene pond and Japanese gardens, is often the setting for wedding pictures for newlywed couples.

In addition, across Burnhamthorpe Road, a nearby ravine provides access to Mississauga Valley Park. This is a large park that features baseball and soccer fields, extensive BBQ areas, water splash pads for children, and a forested creek with plenty of wildfowl.

The Absolute World condos have a full suite of security features.

Perhaps due to its distinctive architecture and worldwide recognition, resale sales at 50 & 60 Absolute Ave. on the multiple listing service have shown a premium over other condos in the Mississauga City Centre. Sales during 2022 have ranged as follows:

50 Absolute Ave and 60 Absolute Ave are “Absoluteworld” – the two Marilyn Monroe towers. These landmark condominium buildings in Mississauga are justifiably world famous for their design, and present unique opportunities for a very stylish lifestyle experience. 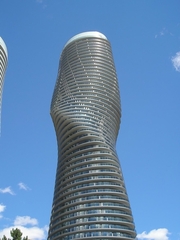